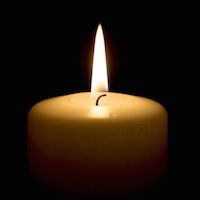 Rosalind Mae Downs was born and raised in Macon MO. At the age of 17 she moved to Kansas City to attend Avila University. Two years later she was married to her husband Michael of 46 years. They lived in Overland Park, Kansas. She had multiple careers‘. Working for South Western Bell for 10 years. She then became a cosmetologist and studio photographer. She did this for ten years. Roz (as she was known), and Michael relocated to Summerset, New Jersey, where she worked for the United States Post Office. Three years later they relocated to Peoria, AZ. and she continued her career with the Post Office retiring after 15 years of service. Roz was an artist. Her art work fills the house and leaves a whimsical impression. Roz was the youngest of three children. She was predeceased by her mother Severia Oberto and father Leon Oberto of Macon, MO. She is survived by her husband Michael in Peoria AZ, her sister Rosemary Earl in Surprise AZ, her brother Richard Oberto in Columbia, MO. and many nieces and nephews.