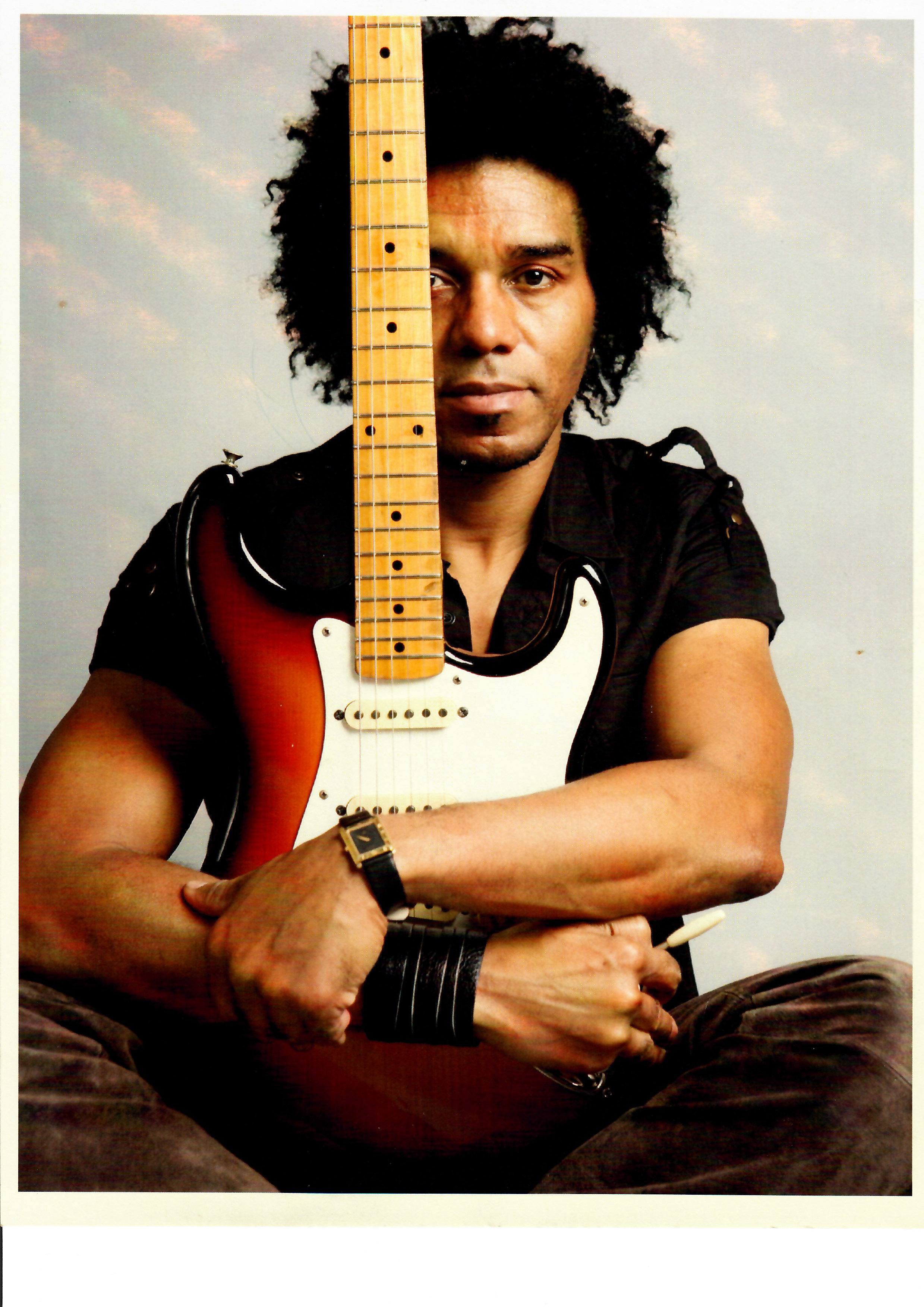 Born and raised in the Motor City, aka Detroit, MI, Duane (Dani) Robinson was surrounded by the sounds of Motown. His appreciation of great music led to a fascination with the guitar. As a young guitarist, he spent his formative years woodshedding (practicing), immersed in the recordings of guitar greats such as Jimmy Page (Led Zeppelin), Grant Green, Jeff Beck (The Jeff Beck Group), Eric Clapton (Cream), Pete Townsend (The Who) and, of course, Jimi Hendrix. At the age of 17, Dani left Laura F. Osborn High to serve in the Marine Corp where he continued to hone his guitar skills. Shortly after leaving the Marines, Dani accepted the Lord Jesus as his savior and was baptized at Canaan Missionary Baptist Church in Detroit, Michigan. As an up-and-coming guitar slinger, Dani decided to move west to Los Angeles to take part in the historic rock-n-roll scene. Soon after his arrival in Tinseltown, he joined with Singer/Songwriter Gregory Darling to form Darling Cruel and signed with Polydor Records and began recording the band's debut album. Gregory and Dani later reconnected when Dani moved to Prague to assist Gregory with his solo CD. Dani continued to live in Prague until June 2019. Over the years, Dani found himself writing, performing with, and even opening for many well-known artists. His journey has taken him to many legendary music venues including “Madison Square Garden” and the “Hollywood Bowl”. During Christmas andNew Year's 2004 and, again, in 2005 and 2006, Dani performed with the band “Off the Wall” for US troops in Iraq, Kuwait, Afghanistan, Bosnia, Sarajevo, and Germany. Dubbed as the best Jimi Hendrix tribute, Dani went on to form the “Stone Free Experience” (aka Stonefree CZexperience) with drummer Mark Morrow and bassist Phil Gibson to tour Europe. Though Dani was fortunate to meet many great names in the industry, the pinnacle of his encounters came when his videos from the Europe tours were spotted on YouTube by his Musical Hero's bass player, William (Billy) Cox, of the legendary Jimmy Hendrix' Band of Gypsys. Dani performed several tours with Billy, and the two went on to form an unbreakable bond. In 2018, while still living in Prague, Dani formed "The Dani Robinson Concept" and released his first solo CD, "Memoirs For The Pastel Girl", which included two songs written for the love of his life, Lucie. The two met in Prague and Lucie was the inspiration for the songs, "Karolina" and "Who Will She Run To". Dani and Lucie were married just three weeks before his death. Dani leaves to celebrate his life his wife Lucie and son Liam Quincy; his parents Larry and Viola; Sister Lori Ann Beard (Jerry); brothers Lawrence (Angela) and Derek; Nieces LaTasha L. Golden, Shannon and Dominique Beard, Ashlie Ogieiriaikhi(Solomon), Lawren, Megan, and Alexis Robinson; Nephews Aaron Robinson (Sono), Michael Robinson, and Nathan Beard; great-nephews Donovan and Joshua Golden, Luke Robinson, and Roman Ogieiriaikhi; great-niece Logan Ogieiriaikhi; Uncles Thomas and Edgar (Gwen) Williams; Aunts Wynee Robinson and Susie McCullough; and a host of other relatives and friends. 2 Corinthians 5:1 King James Version (KJV) For we know that if our earthly house of this tabernacle were dissolved, we have a building of God, an house not made with hands, eternal in the heavens.