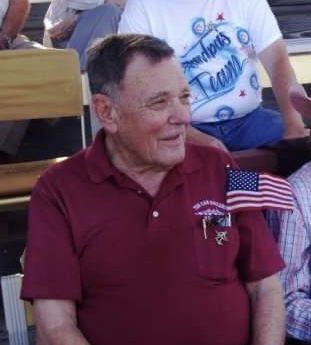 Earl Edgar “Eddie” Moore, Sun City, AZ, passed away Sunday, June 7, 2020, after a brief illness. He was born in Dodge City, Kansas, November 17, 1929. At the age of 17, he joined the Navy and embarked on a lifetime career serving his country. Upon retirement, Eddie continued working for the federal government in much the same capacity as his work for the Navy. In June, 2002, Eddie and his beloved wife Shirley moved from San Diego, CA, to Sun City, AZ, to be closer to Eddie’s family. In 2006, Eddie and Shirley moved to Dodge City, Kansas, to help care for Eddie’s sister, Kathleen. Upon her passing, Eddie and Shirley moved back to Sun City and have resided there ever since. Eddie loved the the American Flag, the military, family, friends, and a good glass of red wine or whiskey. Eddie is survived by the love of his life, Shirley. They shared a long and loving marriage of nearly 68 years. He is also survived by two sisters, Sharon Twidt of Sun City and Linda Madison of Phoenix. In addition, numerous nieces and nephews in different parts of the United States. The family would like to thank their close friends that were such a help during Eddie’s brief illness. Words can not express our heartfelt gratitude. Cremation rites have been accorded.

Services will be held at a later date.