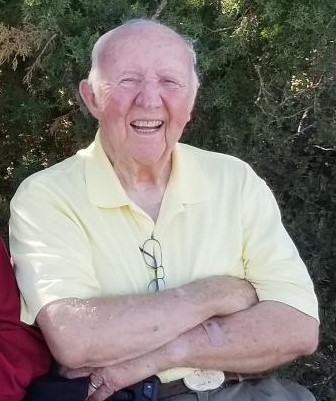 Born in Cooper, Texas, on September 18, 1928, Galen F. Irby was the sixth of nine children of T.A. (Titus Ardell) and Daisy Mae Irby. A man of faith, he was the son of a preacher and father of a church planter. Committed to family, he was life-long friend to his siblings, proud father to his children and their families (30 plus across three generations), and devoted husband and hand-holder to his sweetheart of 72 years – Georgia Jane. Reverend Galen Irby was a minister for 50 years, a motorcyclist for 15, and a full-time motorhomer for 12. He was a force and a friend. His voice boomed. So did his laugh. And he loved to tell stories. Growing up in east Texas during the depression, Galen lived in 19 different places before the age of 18. By age 80 he had lived everywhere from the Mississippi delta to the Midwest, the central Plains to the Pacific Northwest, and eventually, the Valley of the Sun. His love for learning began in a 2-room schoolhouse. He graduated from Denison High School, Decatur Baptist College (later Dallas Baptist University), and Oklahoma Baptist University (OBU). He also studied at Southwestern Baptist Theological Seminary. Galen met (Georgia) Jane White while they were both students at OBU. Matched up through the machinations of his housemate and Jane's little sister, they celebrated with a double wedding ceremony on January 27, 1951 – a mere 4 months from their first date. Always on the move, he and Jane shared their love of travel with their children – whether by station wagon with six kids crisscrossing the Western U.S., taking motorcycle trips across Canada and Europe, or motorhoming to places as far afield as Alaska and Quebec. Since his days on the farm, Galen was an early riser. Dawn walks and mornings of scripture reading were followed by days of indefatigable work. After his early years as a pastor in Oklahoma, Texas, Mississippi and Indiana, Galen worked as Director of Missions for the Kansas-Nebraska Baptist Convention and then for 25 years as leader of the Columbia Basin Baptist Association in eastern Washington and Oregon. For Galen, ministry wasn’t just preaching on Sundays. It was starting scores of new congregations, constructing over a dozen church buildings, and building out Camp Touchet in southeast Washington State. It was also playing dominoes (Texas 42) into the wee hours with his fellow preachers. This ministry carried into retirement – holding Bible studies at motorcycle rallies in his 60s and chairing the missions committee for his beloved church - Avondale Baptist Church - into his 90s. Together with Jane, ministry was also about music (their favorite duet – “I’ve Discovered the Way of Gladness”) and generosity – the door always open, the table always full. Galen left us to go to his heavenly home on September 20, 2022 – 2 days after his 94th birthday. He is missed beyond measure. Galen is survived by his wife, Georgia Jane (White) Irby and their children (and spouses): Carolyn Irby, Sheria Orvis (Bob), Galen Paul Irby (Cynthia Manion), Gary Irby (Joyce), Denny Irby (Pam), and Merita Irby; grandchildren: Erin, Candice, Titus, Collin, Randi, Nathan (Joanna), Austin, Kendall, Jonathan, and Justin; and great grandchildren: Mari, Della, James, Zane, Willim, Charles, Lily, Tristan, and Wyatt. Galen is also survived by his brother Weldon Irby and his wife Jamie of Campbell, Texas, and numerous nieces, nephews, grandnieces, and grandnephews. His family extends to so many friends in churches and communities over the years, including Avondale Baptist Church with Pastor Jack Marslender and close friends Dick and Deanna Arkills. Celebrations of Galen’s life will be held in Avondale, Arizona, and Tri-Cities, Washington. Galen will be laid to rest at Mt. Olivet Cemetery in Buena Vista, Colorado – Jane’s hometown at the foot of the Rocky Mountains.