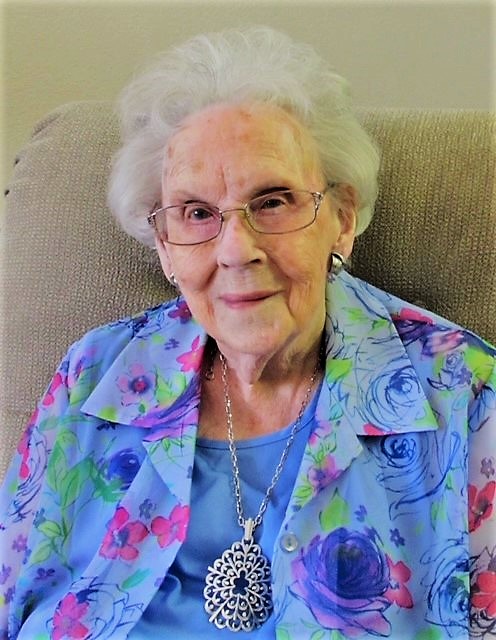 IN LOVING MEMORY OF IRENE NELDON Our dear mother, Irene Loos Neldon, passed away peacefully on January 1, 2023, in Glendale, AZ. She was 101 years old. Irene was born in Coshocton, Ohio on July 13, 1921, at the family home on Kennelworth Avenue. She was the second oldest of the four surviving children born to Sylvia and George Loos … sisters Helen and Pauline, and brother George. Growing up during the Great Depression, Irene learned to appreciate the opportunities and blessings that came her way … valuable lessons that stayed with her throughout her entire life. Her family was fortunate to have both a house in Coshocton and also a 100 acre farm outside of town, which helped provide for their family. Traveling back and forth daily, Irene attended school, then would go out to the farm to tend the cows, pigs, chickens, and a very large garden, from which they sold their produce. In her words, “Things were scarce and times were hard, but we went through it as a family.” Irene graduated from Coshocton High School where she was involved in 4H Club and Home Economics. She grew up knowing her future husband, Vernal Donis Neldon. His family lived just up the road from the farm and the two families would visit each other. They were married November 29, 1942, at her parent’s home on McLean Avenue. Exactly two months later, Vernal was called into the Air Force because of WWII. Working short-term jobs, Irene followed Vern every time he was transferred, living out of a footlocker. She loved telling her family that they moved a total of 22 times! Six years later, Vern and Irene were overjoyed to welcome Steven, the first of their five children, followed by Michael, Cynthia, Bruce, and Craig. Eventually, the family moved from Coshocton to Phoenix, AZ, where Irene remained for the rest of her life. She was a devoted and loving mother, completely involved in all of her family’s endeavors … various sports, church, and school activities. Her family enjoyed camping all over Arizona and the Southwest (the beach at San Clemente State Park was a favorite!) After the children were grown, Irene and Vern enjoyed visiting places all over the U.S. in their Airstream trailer. And Irene was such a proud and happy grandmother! She felt so blessed to have her nine grandchildren and 11 great-grands (plus two Japanese great-grands) … and her family was blessed with HER. Amazingly, just off the top of her head, she knew everyone’s birthdays, anniversaries, and all the important details of their lives! To Irene, family was everything … and it was certainly her crowning glory and joy. She was a wonderful, loving wife, mother, and grandmother, as well as being a woman of integrity, honesty, and honor. Irene’s beautiful life will be forever cherished in the lives of her children: Steven Neldon and Michael Neldon (Sharon), both of San Diego, Cynthia Johnson (Jeff), of Litchfield Park, AZ, Bruce Neldon (Crystal) of Phoenix, AZ, and Craig Neldon of Glendale, AZ., her many grandchildren and great-grandchildren, and her devoted nieces and nephews (Marilyn, Ellen, Janet, Larry, Gerald, Nancy, Barbara, and Kay). Irene was preceded in death by the love of her life, Vernal Neldon, and by her siblings, Helen, Pauline, and George. She will be forever missed and her memory will be deeply revered by all who knew her. The family would like to express our thanks for the wonderful help, care, and love given our mother by Aegis Hospice and the 2nd Floor Staff of Thunderbird Senior Living, and to her friends Jim and Cindy, Tom and Vonnie, and Pastor Janet of Shepherd of the Valley Methodist Church. CELEBRATION OF LIFE In memory of our devoted mother, Irene Neldon You are cordially invited to attend an OPEN HOUSE in her honor. Saturday, February 18, 2023 2:00 pm – 4:00 pm Home of Bruce and Crystal Neldon 15050 N. 8th Way Phoenix, AZ 85022 Please RSVP by February 12, 2023 Text: Sharon Neldon - (619) 417-2852 If you like, wear blue … Irene’s favorite color!