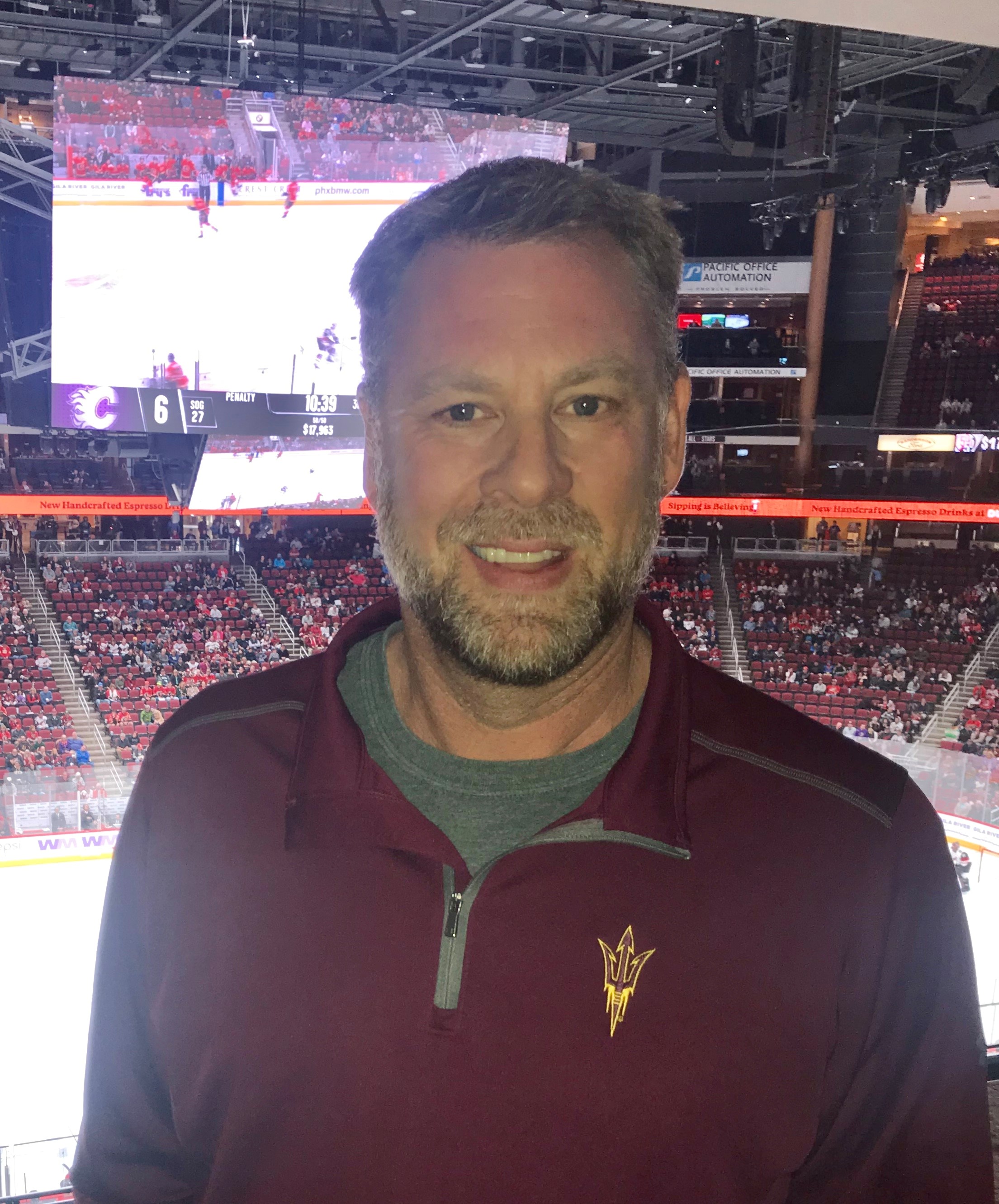 John Mellor, loving husband, father, son, brother and friend died peacefully while surrounded by family on July 27, 2021, at his home in Phoenix, AZ after a courageous battle with cancer. He was 49 years old. John was born on May 1, 1972, in Calgary, Alberta, Canada, where he attended Henry Wise Wood High School and was named to the Calgary Herald Volleyball Hall of Fame in 1990. His love of sports never waned, beginning his career in media relations with the NHL’s Phoenix Coyotes after earning a BA in Psychology from the University of Calgary and a BA in Media Relations from Arizona State University. He was happiest spending time with family and friends, most importantly his loving wife of 17 years, Jennifer and his daughters Mia, Lexi and Riley. He loved to coach and watch them play sports, drag them around the lake on a tube, travel around the world, and fist pump at concerts. John also treasured time on the golf course, especially with his father, Roger, step-mother Vickie and step-brothers, Brent “Bobbo”, Randy “Rando” and Ryan “Beeg.” John came to the United States to start his career in sports with the Arizona Coyotes and left in 2001 to start WorkInSports.com. For over 20 years, John was the unconditional leader of a team who believed in each other like family, created a network of business colleagues that were even better friends, and cultivated a business that would eventually be sold to a company that embraced the WIS culture John inspired. He was an active member in Entrepreneur’s Organization, finding not only business support and guidance but an amazing group of life-long friends. John was the ultra-athlete, excelling at every sport he played. He was an entertaining golfer, extraordinary ping pong player, dynamite hockey goalie and aspiring pickleball champion. Known as the “Pillow-Stacker”, John protected the net as a practice goalie for the Phoenix Coyotes and played for the Full Rhinos for over 20 years. John will be remembered for many things, none more so than his passion to support individuals with special needs. The entire Mellor family participated in Special Olympics triathlons over the years and John was a floor hockey referee and coach at Special Olympics events throughout Arizona. At nearly 6’5” John hugged you in a way that would linger, finishing with a clap on the back that would leave a mark, but show his love. Everyone that met John felt the kind and humble spirit he so embodied. He loved his Canadian roots; visiting “God’s Country” to see his mom Lynda and step-dad Joe and cheering on his beloved Calgary Flames. John is survived by wife Jennifer, daughters Mia, Lexi, and Riley, parents Roger Mellor (Vickie) and Lynda Beecroft (Joe Crichton), step-brothers Brent “Bobbo” Oakley (Michelle - “Dube”), Randy “Rando” Oakley (Angela), Ryan “Beeg” Oakley (Melanie), Uncle Peter Beecroft (Bex) and 20 rambunctious nieces and nephews. He was predeceased by grandparents John and Irene Mellor, Ken Beecroft and Doreen Green (Frank) and Uncle Nicky Beecroft. He has loving family throughout England, Canada and the US.

Services will be held Monday, August 2nd at 10am at St. Rose Philippine Duchesne, 2825 West Rose Canyon Circle, Anthem, Arizona 85086 followed by a Celebration of Life from 1-3 at Sun Devil Stadium at Arizona State University in the San Tan Ford Club, 499 East Rio Salado Parkway, Tempe, AZ 85281. Due to recent CDC guidance, masks are encouraged. For those who are unable to attend John’s services in person, you can view via live stream at: Church Service - Monday 8/2 at 10am PT - Live streaming through church Facebook page at https://www.facebook.com/SaintRoseAnthem/ Celebration of Live - Monday 8/2 1-3pm PT - https://asu.zoom.us/j/84310539111?pwd=Ykx1V3VrOFVsR3lZZHdqRXplWGlTZz09 Password: 347750

In lieu of flowers, the family has established the Mellor Family Fund with the Arizona Community Foundation so that John’s girls can continue to carry out John’s charitable giving. Donations can be made at https://arizonacommunityfoundation.kimbia.com/mellor.