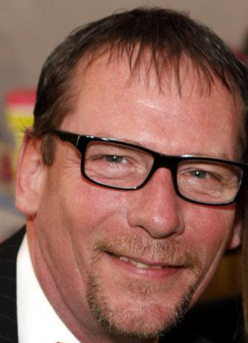 Joseph “Joe” Scott Crisp, Sr. passed away peacefully with his wife and kids by his side on December 27, 2019 in Phoenix, AZ. He was 59. Mr. Crisp, Sr. is survived by his wife, Michelle M. Rice-Crisp; daughter Danielle “Dani” Paull-Crisp (Tina); son Jason E. Crisp; grandson Joseph M. Paull-Crisp; father Kenneth Herbert Crisp (Janette); and aunts Fran Sebald (Dave) and Terry Surleta (Dean.) He is preceded in death by his son, Joseph S. Crisp, Jr. and mother, Linda J. Seeger. Mr. Crisp, Sr. grew up in Oak Park, IL and was most recently a resident of Phoenix, AZ. He graduated from the Cooking and Hospitality Institute of Chicago (C.H.I.C.) with an Associate of Applied Science in Culinary Arts degree (Le Cordon Bleu Affiliated in December 2005.) He was co-founder of Quik, a Lombard, IL based printing business. Joe was a loving husband, dedicated father, devoted grandfather “Papa”, nephew, and friend to many. He was an awesome chef, avid fisherman, and above all, the most compassionate person one could know.

In lieu of flowers, donations accepted at https://tinyurl.com/u329g8a