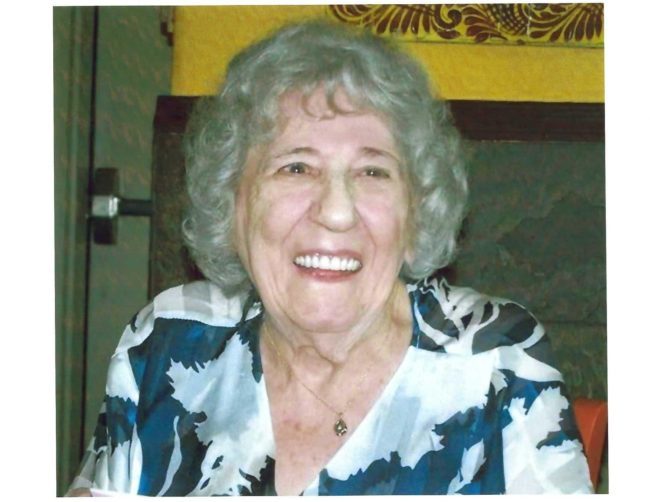 She was born in Moline IL, and raised in Lake Worth Florida where she was a copy writer for a local radio station. She loved shopping for clothes on Worth Avenue during her lunch hour. She met her future husband Harry Mitchell at a USO dance in Ft. Meyers Florida and they were married just before he shipped out overseas to the Philippines during WWII. When the war was over they moved to Tucson, Arizona, where Harry attended the U of A and they started a home. The moved to Phoenix in 1948 where she again was a copy writer and wrote jingles for commercials for KOOL radio and Homer Lane, the station president. She became a stay-at-home mom raising six children and remaining sane while doing so in the same house for 50+ years. She was good natured and kind. She never raised a hand to any of us, and we turned out just fine. She went camping and fishing with us and our dad even though we found out later those were not her favorite things to do. Toward the end of her life, she enjoyed going to everyones' house for Sunday dinners, doing crosswords and watching Dr. Phil. She also became the family kiosk. If we wanted the family to know something, we would just tell her and she made sure everyone knew. We will miss her dearly.

Survived by her six children - Pamela Cavalier (John), Ellen Vanta (Mike), Roger Mitchell (Joy), Irene Hageman (Don), Maxine Mitchell and Harry Mitchell Jr. (Theresa); her 15 grandchildren, her many, many great grandchildren and two great, great granddaughters. She was predeceased by her husband, Harry of 53 years, one grandson Donald and one great granddaughter, Amanda. There was a private family service held at the National Memorial Cemetery on October 10, at 10:00 officiated by Pastor Bobby, followed by a Celebration of Life at her favorite restaurant, Valle Luna--thank you Oli; and thank you Mom xo.

The family would like to thank her Arizona Sunrise Hospice team - Dr. Brian, Nurse Trish and Pastor Bobby; also her caregivers at Silver Crown Sr. Home - Katy, Rosa and Samantha. They all were her angels on earth.