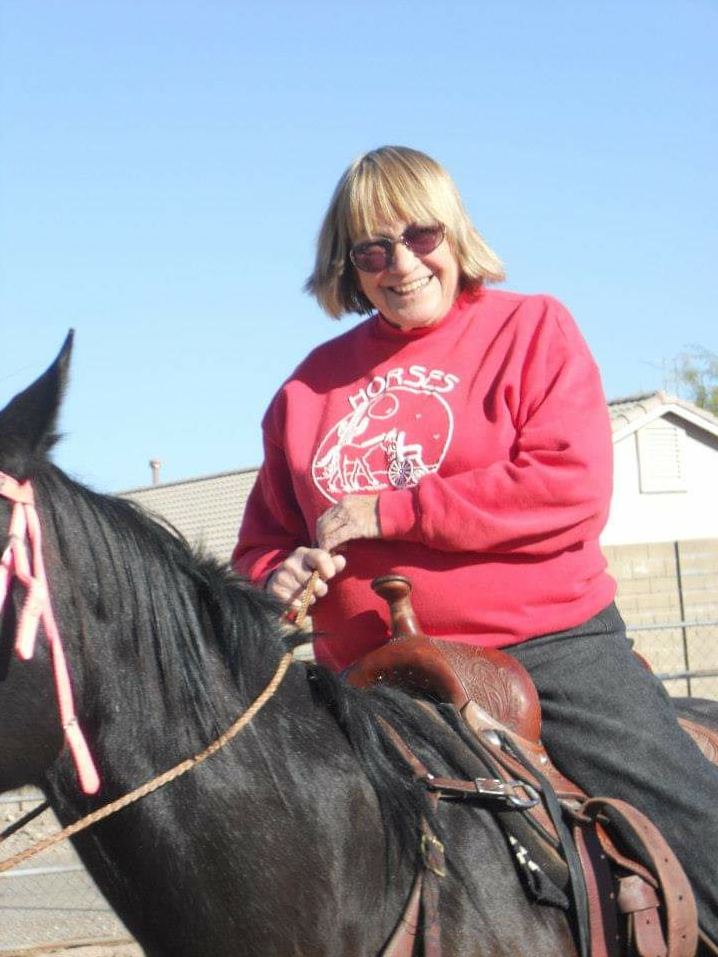 Kate “Katie” Margaret McCullough, daughter of Agnes and George Weiland, passed away peacefully on October 24, 2021, in Glendale, Arizona after 80 years full of family, adventure, and horses. Katie was a loving daughter, wife, mother, and equestrian with a pointed wit and mischievous sense of humor that would often surprise and shock the uninitiated. Her penchant for finding the joke in any situation, no matter how dark, was one of her most recognizable traits, and one that persisted to her final days. As a young woman in Minneapolis, Kate took much pride in her horses and friendships, centered around the stable, home, and school. After attending Catholic school, she attended college and secured a job at WCCO-TV in Minneapolis, where she met staff photographer David, her future husband. The two married and moved to Arizona in the early 1970s, where they adjusted to their new desert climate and lifestyle. Even on the hottest summer days in Phoenix, Kate would claim she never, ever missed Minnesota winters. However, she absolutely loved her home state and would visit whenever possible. Kate and David were founding members of Our Lady of The Valley Catholic Church, attending services well before the physical church itself was built. In 1974 the two welcomed a son, Gavin, into a family that already included a beloved dog and cat. Kate’s four-footed family would eventually expand to include lop rabbits and, once again, horses. In addition to all things horse-related, Katie nurtured her passion for France and French culture throughout her life. She traveled to France several times, enjoying many adventures there. She easily charmed the locals with her class and style, and she would return home with stories that fascinated many of her less worldly family and friends. Kate worked in Phoenix-area radio, and later was chief editor of The Bell Ringer, a monthly community newsletter for which she handled every aspect of production including by-hand layout, copywriting, wrangling contributors, and ad solicitation. Kate was particularly proud of her work on The Bell Ringer. In later years, Kate returned to the equestrian life by volunteering with Horses Help, an active equestrian therapy organization. Working with Horses Help allowed her to both give of her time and spend it around horses and horse-loving people. Inevitably, Kate bought her own horse. Although her son was often concerned about her safety around the unbroken and sprightly mare, the situation provided immeasurable joy, pride, and satisfaction to Kate in her later years. Katie was preceded in death by her parents George and Agnes, and her husband David. She is survived by her son Gavin – and she would insist this be included – her horse June.

Funeral Services are to be determined at a later date.

In lieu of flowers, please consider a donation in Katie’s memory to Horses Help. https://www.horseshelp.org/donations