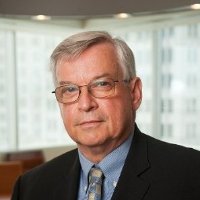 BYRNES, Michael J. Aged 73, of Surprise Arizona, formerly of Beverly, passed away peacefully at home on May 27, 2020, with family by his side. He is the beloved husband of 18 years to Diane Brown. Michael was the son of the late Kathleen (Donahue) and Alfred J. Byrnes, both of Beverly. Besides his wife, Michael is survived by his son, Daniel and his wife Kristal of Peoria, AZ and his two stepsons, George Pedranti and his wife Gina of Uxbridge, MA and Brian Pedranti and his significant other Amy Danziger of Milford, MA; his grandsons, Cameron and Tommy Byrnes of Peoria, AZ, Aidan and Lily Heitkam of Peoria, AZ, Phoebe Weldon of Peoria, AZ, Alec Pedranti and his fiancée Liz Stone of Salem, MA, and Caitlin and Jordan Pedranti of Milford, MA; and many nephews and nieces and cousins. He retired as VP of Senior Housing & Healthcare, specializing in capital finance, from Dougherty Mortgage after a severe stroke in 2016. With over 35 years of previous experience in healthcare and seniors housing, Michael had also worked at Blue Cross and Blue Shield of MA and Maine, as VP of Rockport Mortgage, owner of Aberdeen Advisors, and was a former partner at Coopers and Lybrand. He graduated from Beverly High School in 1965 and Merrimack College in 1969 with a BS in Accounting and was licensed as a CPA. Michael was a United States Marine Corps veteran. His day started with coffee, a grouping of comics that he loved to share with others, and then reading six or seven newspapers. A gifted storyteller, Mike changed seemingly mundane events into witty experiences. He remained in contact with new and old friends sharing thoughtful messages, humorous anecdotes, and jokes that sometimes bordered on irreverent. An inveterate traveler and history buff, Mike was eager to explore new restaurants, music venues, zoos (usually with grandchildren in tow), botanical gardens, and any city hosting his beloved Bruins, Red Sox or Patriots. His passions included gardening, listening to many genres of music with friends, and reading. A speed reader he read about five books per week. An avid grill master, his spicy specialties were enjoyed at many parties. Grandchildren and family were most important. He taught a number of great lessons, many that horrified the child’s mother! He worried, loved, protected, and openly cared for his son, grandchildren, and wife. No one skates through life is without experiencing tragic moments. Mike handled those with grace, fortified by his belief in the Serenity Prayer, which he recited every night.

As a result of the ongoing health crisis, a memorial service will take place at a later date in Surprise AZ. To send a message of condolence, visit Best Funeral Services at https://www.bestfuneralservices.com/.

Leave a Reply to Judy and Michael Fowler Cancel reply