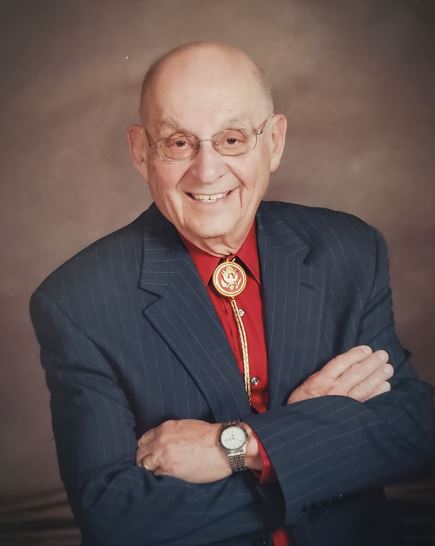 Michael Ewoski, 93, of Youngtown, AZ passed away December 23, 2022. He is survived by his wife Mary, daughters Karen Jensen and Michele (Chuck) Ewoski Duey, 3 stepsons John (Yaz), Tim (Candy) and Ted (Robyn) Ryder, 9 grandchildren, 15 great grandchildren, sister Ginger Gosell, sister-in-law Corinne McGrail, brother-in-law Joseph J. Fleming and several nieces and nephews. He was preceded in death by his first wife Mary Anne, grandson Jeremiah Jensen, his parents Jack and Mabel Ewoski, sisters Agnes, Jacque and June. Michael was born and raised in Chicago, Illinois. He served in the US Army and was a Korean War veteran. He worked for Western Electric and was transferred to Littleton, Colorado in 1965. He and Mary Anne moved to Sun City, AZ in 1998. Most recently, he lived in Youngtown, AZ. Michael loved his family, enjoyed all sports and played most of them. He had a quick wit and a great sense of humor. He enjoyed life and treasured each and every day.

A Celebration of Life will be held Wednesday, June 25 at 2 pm at Lakeview United Methodist Church in Sun City, AZ, followed by interment at Ft. Logan National Cemetery in Denver, Colorado on January 27, 2023 at 1pm.

In lieu of flowers, donations can be made to www.Heifer.org.