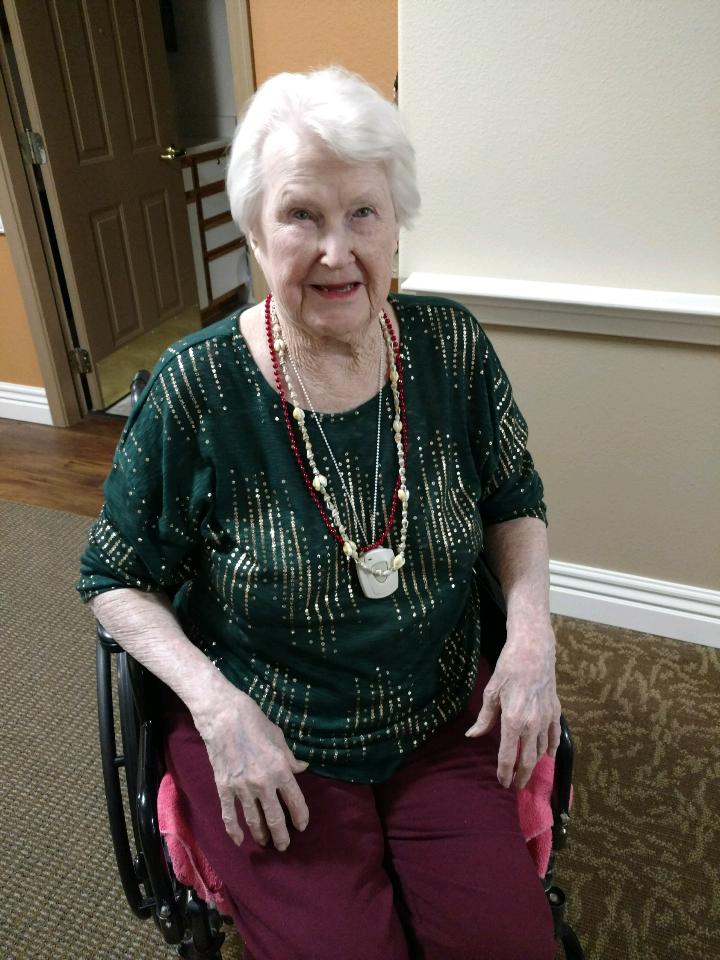 Naomi (“Noni”) Monk Morgan passed away peacefully November 24th 2021 from natural causes at the age of 90 in Glendale, Arizona at Hospice of the Valley, Thunderbird PCU. Born in Faxon, Oklahoma January 1, 1931 in the back room of her Daddy’s restaurant, Naomi moved to Alamogordo at an early age where she grew up into a tall, beautiful, freckle faced red-head. Naomi graduated from Alamogordo High School in the 1946-47 school year. Naomi enjoyed church activities theatre, dancing and gymnastics. She appeared in several Alamogordo Music Theatre productions in the mid 1950’s with her husband Wayne including “Oklahoma”, “Damn Yankees” and more. Married in 1951 to Sergeant Wylie Wayne Morgan, they lived in Las Cruces, New Mexico in the early years while Wayne completed his Mechanical Engineering Bachelor’s Degree at New Mexico State University. She had her only child Ronald Wayne Morgan in August 1953 in Las Cruces. They moved back to Alamogordo after graduation accepting a position with Hughes Aircraft Company. Moved to Southern California in 1959 with a promotion from Hughes Aircraft. She was a devoted wife and mother. Naomi and Wayne Divorced in 1964. Naomi worked in the aerospace industry in Southern California as an executive secretary until 1968. In the summer of 1969, Naomi moved to Phoenix, Arizona, briefly worked as a corporate secretary then worked hard to get her real estate license. She met her life partner Bill DeMouy in 1969 and was with him until his death in 2013. She worked for Tom Jackson and Associates for many years, until it became Coldwell Banker, then Remax. Naomi retired in 2007. Naomi was a loved, dedicated and respected real estate agent specializing in relocations with hundreds of satisfied clients. Since retirement, Naomi lived at her home in Scottsdale, AZ until 2016 when she moved to Scottsdale Village Square and later to Bethesda Gardens assisted living in Phoenix on Cave Creek Road until her sweet lord called upon her to come home. Naomi is preceded in death by her father Lafayette McMullen Monk (1903-1975), and Mother Louise Monk (1911-1997), Sister Betty Jane Schoenfield (1929-2011), Sister Sharon Faye Duran (1943-2017), Brother Ronald Winston Monk (1936-2011) and nephews Vince Birdwell (1962-2018), Gilbert Martin Monk (1964-2013), Bryan Lance Monk (1960-1974), and Daniel Joseph “Danny” Gallegos (1966-1994). Survived by Sister Rebecca Lynn “Becky” Gallegos (1948-) and her husband Chuck Tidwell. Her only son Ronald Wayne Morgan (1953-), and Grandchildren Patrick Nicholas Morgan (1989-) and Molly Kathleen Morgan (1992-) and numerous nieces and nephews. In particular, her loving niece Dawn Duran-Healy and nephew Vince Birdwell and their families were her close caregivers and deserve special recognition for their unconditional love and dedication to make Naomi comfortable and safe during her final years. Naomi’s cremation and care at Best Funeral Home, Peoria, AZ. Naomi’s ashes will be buried in Alamogordo, New Mexico next to her Mother and Daddy. A memorial service and burial is currently being planned for the Spring of 2022.

Naomi’s cremation and care at Best Funeral Services, Peoria, AZ. Naomi’s ashes will be buried in Alamogordo, New Mexico next to her Mother and Daddy. A memorial service and burial is currently being planned for the Spring of 2022.