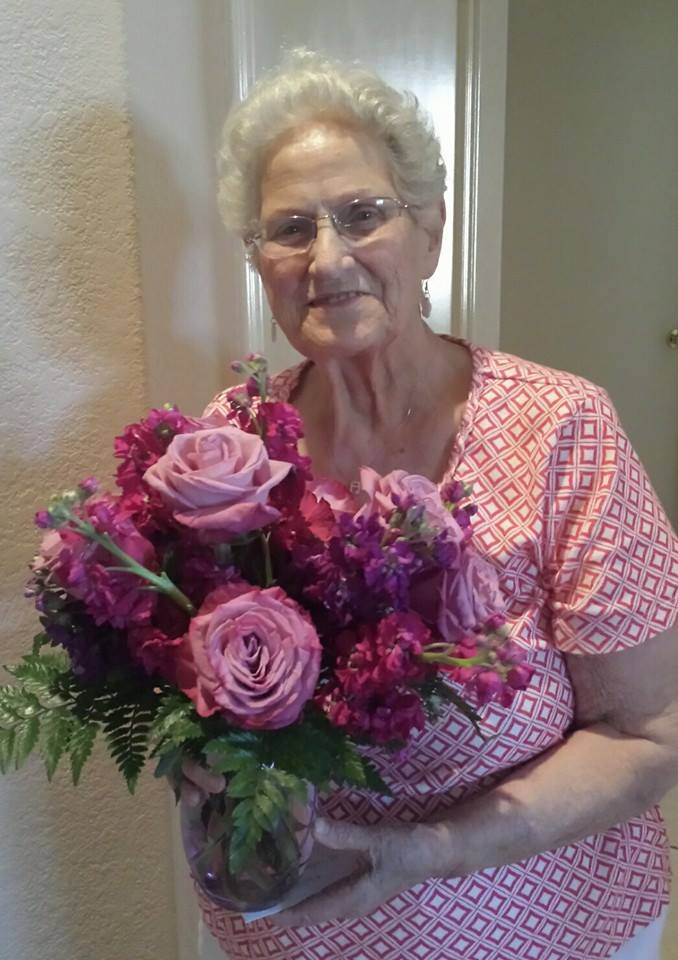 Pauline Marie Caponiti, 92 years, born July 2, 1927, passed at 6:10pm on October 15, 2019 in Phoenix, Arizona with her family around her. Pauline was a loving force of nature. She had strong ideals and an independent Spirit long before it was acceptable in women. Her strong sense of love, community and family were her guiding light in this life. She was always one to live from her heart and take a strong stand for what she believed in. Pauline was born and raised in Syracuse, New York. At age 5 she developed a serious illness and physicians told her parents she would never be able to have children of her own. Years later she gave birth to 5 beautiful children, again proving the experts don’t know everything and along with that, establishing a foundation in her life of proving anyone wrong that tried to put limitations on her. Pauline was one of 11 children, 7 boys and 4 girls of which she was the third oldest child and the eldest girl. She was the right hand to her mother at a time when life wasn’t easy for many families during the depression era. She became like a second mom to many of her younger siblings, even dropping out of school in 10th grade to help her father care for the household due to her mother having an extended hospital stay. Years later after she had her own family, she received her High School GED. At 16 years old Pauline had the opportunity to go to Washington D.C. and start a career with the United States Government. It was an Administrative staff position with a brand-new department that would sometime in the very near future be known as the CIA. Even though her family would agree that she was incredibly intelligent, resourceful and resilient from a young age, being a CIA Operative was never in the cards for her, instead she went on to become one of the first to work on computers in the US Government, she was truly ahead of her time. That position led her to a long career with the Federal Government where she eventually retired as a Government Contractor. That’s not all she found in Washington D.C. It was there that Pauline met the love of her life, Natale (‘Nick’) Caponiti. A very good-looking, Italian young man that had just returned from the war. They met on a blind date. She was not crazy about him at all on that first date. When that date ended, Natale (Nick) told her “I’m going to marry you!” to which she replied, “You’re crazy!”. By the time Nick had passed in 2009, they had lived and loved for 62 years. Faith and Family were the core values of Nick and Pauline and from that beautiful union came Joanne (Giovanna) Marie, Natalie Gaye, Louis Frederick, Toni-Marie and Paula Marie. Pauline was self-taught on so many levels. At age 50 she was still working full time, however, she needed something ‘just for her’ and she took up the Fine Art of what is known as Porcelain Painting or China Painting (using paints and a firing technique to paint flowers, landscapes and portraits on a plain, white surface of porcelain or as it is better known ‘china’). After years of studying her craft she became a Master Artist and Teacher of this Fine Art. Pauline didn’t hesitate to become a member of an organization if it was something she believed in, such as Porcelain Artists Guild (for China Painting) where she was a member since 1987. Most times she would become one of the main leadership of the group. Her motto was “why bother to join if you don’t want to make a difference”. How would she want to be remembered? That one’s easy: Her favorite expressions of her creative self: Singing and China Painting Favorite Song: Ave Maria Favorite Dog? The Underdog – she was always taking their side Love of her life? Natale "Nick" Caponiti Second Loves of her life? Her family Outstanding qualities her family remembers her by: Loving, kind, thoughtful, persistent, loyal, passionate, lived life from the heart, always an open door especially for the hurting, deep Spiritual commitment, true friend, Great Mom! Rest in peace Pauline Marie Caponiti. Yours has been a live well lived. Your legacy of love lives on.

Service has already been held