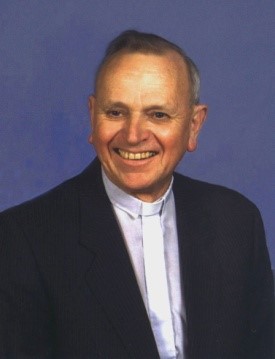 The Rev. Fr. William K. Young was born on June 21, 1938 in El Paso, Texas, to King William Young and Pat Fellers Young. He graduated from Ysleta HS in 1956 and received his BA from the University of Texas, El Paso in 1962. A Navy veteran, he served on active duty two years in Vietnam and Southeast Asia, then on active duty two years as a legal officer at Naval Schools Command in San Francisco. He was discharged a full lieutenant in 1966. Bill Young served on the staff of San Francisco's Grace Cathedral as Deputy Verger and assistant organist from 1966-1967, having sung in its Cathedral Choir of Men and Boys from 1964-66, while in the Navy. An organist, Young continued his education at Union Theological Seminary in New York where he earned his Master's Degree in organ and choral-conducting from the seminary's School of Sacred Music in 1969 (now at Yale University). From 1970-1975 Young served with organ and choirs at 2 churches: St. Paul's Episcopal Church in Visalia, CA and the Episcopal Church of Christ the King in El Paso, TX. During those years, Young was also a DJ and talk-show host in Texas and New Mexico and a co-owner with Leo Miletich of American Musical Heritage, producing weekly radio programs on Broadway composers in El Paso, TX. Fr. Young received his Master's Degree in Divinity in 1978 from the Church Divinity School of the Pacific, Berkeley, CA. He met and married his wife Katy in seminary, where she graduated with an MA in Church History in 1977 from the Graduate Theological Union and CDSP. They were married in the seminary chapel, in 1978 – with Katy’s son Mike and daughter Kelley carrying the ring pillow - and the rose-petal basket. Bill was now a husband and father, with a family of four. Deacon William K. Young was ordained an Episcopal priest on Ascension Day, May 24, 1979. His first ministry was at Church of the Holy Mount in Ruidoso, New Mexico, from 1978 to 1980, also serving on the Commission on Ministry in the Diocese of the Rio Grande. Ruidoso wasn’t far from El Paso -so the family got to share holidays in person with his parents, sister Jean & niece, Tiffany. In 1980, Fr. Young was called to be Rector of All Saints Church in Watsonville, CA, within the new Diocese of El Camino Real, serving for 17 years, from 1980 to 1997, during which All Saints hosted three diocesan conventions. In El Camino Real, he chaired both the Liturgy and Ecumenical Commissions and was chairman of the Convention Process Commission. He served as the Protestant Representative on the N. CA Roman Catholic Ecumenical Commission and felt honored to be introduced to Pope John Paul II when he visited CA in 1987. Fr. Young also served on the Provincial Synod of the Episcopal 8th. Province, the annual gathering of the 14 Western-most Episcopal dioceses including Alaska, Hawaii and Taiwan. His service on the Provincial Synod included organizing and directing its liturgies. Additionally, he served on the Diocesan Council, Budget Committee and Standing Committee. From 1988 to 1994, he was a Deputy to the General Convention of the Episcopal Church, including Phoenix, in 1991. Bill+ also found time for travel and fun with his family, like his brother Lou in GA -and trips to Europe & HI. In 1997, the Rev. Young was called to be Rector of Advent Episcopal Church in Sun City West, AZ, serving 7 years, from 1997 through 2004, the year he retired from holding cure. After retirement, he became the Interim Rector of St. Christopher's Episcopal Church in Sun City, AZ, serving for 4 years, from 2005 through 2008. From 2009-2012, he served as a retired Priest at All Saints, Central Ave, Phoenix, then was an Assisting Priest for 7 years at Christ Church of the Ascension, Paradise Valley, where he also served as Interim Rector, in 2015. For the Episcopal Diocese of Arizona, Fr. Young was Chairman of the Liturgy and Music Commission, also serving both on the Western Regional Parish Council and the Diocesan Council. A 32nd. Degree Mason, Bill+ also was a Past Master of Peoria Lodge 31 and was Chaplain for the S.C. West High Twelve Club. He and Katy were delighted that during their 24 AZ years, his best friend Gary Welsh and family also lived in the Phoenix area. Fr. Young (organist: in AGO) and his wife Katy (flautist) were active in music, singing in the Santa Cruz Chorale and I Cantori di Carmel in CA - and in AZ, in the AZ Arts Chorale, the PHX College Chamber Singers, the CD Singers and in their churches. Bill+ is survived by his wife Katy of Sun City West, AZ, his brother, Lewis Young of Bethlehem, GA, his sister Jean Ames of El Paso, TX, his step-children Michael F. Dolan of Olympia, WA and Kelley Dolan Ryan of Bend, OR and 3 grandchildren: Kristen Olofson (US Navy) and Connor and Torin Ryan of Bakersfield, CA. Donations in Father Bill+ ’s memory can be sent to SIM, the Society for the Increase of the Ministry (simministry.org/donate) or to the Shriners’ Children’s Hospitals (lovetotherescue.org). The Rev. William K. Young’s memorial service and reception will be on Friday, October 8 at 3:00 pm at Advent Episcopal Church, 13150 W. Spanish Garden Drive, Sun City West, Arizona.

SIM, the Society for the Increase of the Ministry (simministry.org/donate) or Shriners Hospitals for Children (donate.lovetotherescue.org)