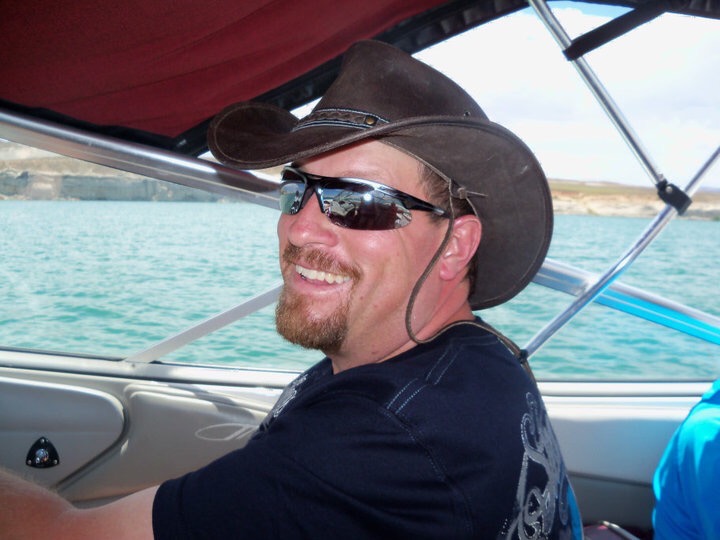 Wayne Scott Lucas, 49, passed away Saturday, January 11, 2020 at his home in Surprise, Arizona. Wayne was born in Kenosha, Wisconsin on October 6, 1970 to Norbert and Linda Lucas. He attended Warren Township High School and Gateway Technical College. He was a member of the Oneida Tribe of Indians. He moved to Flagstaff, Arizona and met his wife, Keri Lucas in 2002. They married on November 6, 2003 and their daughter, Dakota Stephanie, was born on October 21, 2005. Wayne loved his family and friends tremendously. He kept in touch with many childhood friends, talked to his mom almost daily and his daughter was his world. He had a wonderful sense of humor and his big, dimpled smile and infectious laugh would light up the room. He had a larger than life personality and big heart. He was an avid Chicago Bears, Cubs, Blackhawks and Bulls fan. He loved the Arizona sunrises/sunsets and boating at Lake Powell was when he was happiest. He worked in concrete most of his career and had a talent for making it look awesome. One of his greatest accomplishments was pouring all the concrete structures at Bearizona Wildlife Park in Williams, Arizona. Wayne is survived by his wife, Keri; daughter, Dakota; stepson, Austin; mother, Linda; brothers, Steve (Lorie) and Daniel; sisters, Stephanie and Shawna (Chad); nieces Courtney, Jasmine, and Ava; nephew, Evan; great nephew Lucas Axberg; numerous aunts, uncles, and cousins. Wayne was preceded in death by his father, Norbert Lucas; grandmother Laura ”Polly” Doxtator Lucas (paternal); grandparents Ralph and Dorothy Beine (maternal); uncle, Doug Beine; and close friend, Kelly O’Donnell.